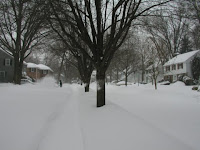 I hope everybody had a great Christmas. I'm snowed in, warm and toasty, with my family in New Jersey. Yes, I know, the blizzard of the decade and all that stuff. Don't ask.
But we survived and now it's time to hunker down with a good book. Or maybe a thought-provoking blog entry.

Here's a suggestion- my turn over at A Good Blog is Hard to Find, that great group of Southern writers that are such fun to follow.

Click right here for my thoughts about eBooks. And Book Spying. And a few other things.
Posted by Augusta Scattergood at 8:31 PM No comments:

Email ThisBlogThis!Share to TwitterShare to FacebookShare to Pinterest
Labels: A Good Blog is Hard to Find, Chatham 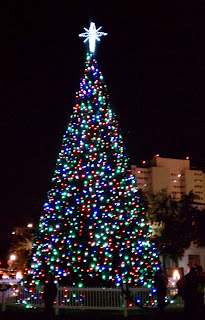 Yes, we are walking around coatless and mittenless. There's no fireplace for stocking-hanging with care. But last night we walked along the waterfront in downtown St. Petersburg and the moon could take your breath away, low-hanging and orange. We saw the huge-- well not quite Rock Center or White House huge-- but a plenty big enough Christmas tree. There were ice skaters! (was that a plastic rink?) Holiday cheer to go all around!


And today's paper announced we've been named (by whom? but it's true!) the Sunset Capital of  (what- World, Country, State?) Something good.
Beautiful sunsets trump snowstorms, I do believe. 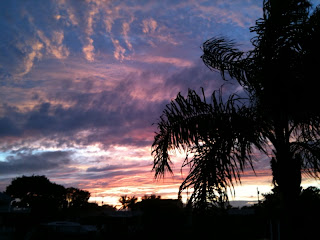 As we strolled back to the car, we passed the new Chihuly gallery. Another fine reason to live in or visit Tampa Bay. 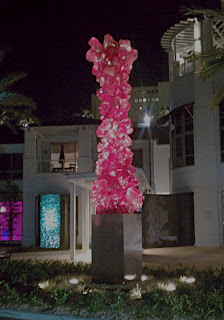 Merry Christmas, good reading, happy cooking and eating, to all!
Check back for more great books, writing tips, and whatever else I can find to share with you in 2011.
Posted by Augusta Scattergood at 10:41 PM No comments:

December is a time for family, Christmas trees, baking and eating, right? And it's followed by (my least favorite holiday, really) New Year's Eve and those dreaded resolutions.

But to me, January will forever be the time of Newbery and Caldecott Awards. And December the time for reading lots of new books.

At the last two schools where I was the librarian, we focused much of January on these award-winning books. For the younger children, it was all about the best picture book of the year. While the 5th graders read new, potential Newbery contenders. Having spent a lot of time reading and discussing past winners and the criteria for the award, and even having guest speakers who'd been on the committee, my students voted on their favorite and listened with great interest to the announcement from the American Library Association's Mid-Winter Conference.

Once they even traveled to D.C. from our school in Baltimore, dressed in costume and wearing signs supporting their choice, to be present at the actual announcement. Now, traveling would not be necessary! I think the announcement is streamed live for schools to hear.

And now, instead of discussing our favorite choices, together with young readers, I follow blogs and email fellow writers about our favorite books. Here's the original Newbery Blog, picking its shortlist.

SUGAR CHANGED THE WORLD by Marc Aronson and Marina Budhos

THEY CALLED THEMSELVES THE KKK by Susan Campbell Bartoletti

THE KNEEBONE BOY by Ellen Potter

THE DREAMER by Pam Munoz Ryan

A CONSPIRACY OF KINGS by Megan Whalen Turner

ONE CRAZY SUMMER by Rita Williams-Garcia

Remember, that's just one blog's opinion!
Although there is no nominated list, and only the committee knows what books are truly under consideration (anything nominated must have been published in the previous year and published in the U.S.), bloggers don't let that stop them! It's fun to speculate. Let the games begin!

Any favorites of your own so far?
Posted by Augusta Scattergood at 7:59 AM 2 comments:

My December reading. Am I nuts?

I'm truly enjoying the book my neighbor shared with me. I've been wanting to read this for two years, since the amazing guide (thanks, Julie!) at Chartres Cathedral told his tourists that Pillars of the Earth by Ken Follett was THE book to read about the building of the cathedral. So I'm just going with the flow and enjoying the story. And it's taking me to a whole new place. I'd stopped reading books that were this lengthy for various reasons, but so far I'm not ready to abandon this tome.


However, when this quote popped up on my google page this morning, I paused to wonder if there's a message here I should consider...

The covers of this book are too far apart.
- Ambrose Bierce
Posted by Augusta Scattergood at 9:48 AM 2 comments:

Email ThisBlogThis!Share to TwitterShare to FacebookShare to Pinterest
Labels: Ambrose Bierce, Pillars of the Earth, quotations

Heading to the Bookstore

The bricks and mortar kind. On Sunday, I tried my local Borders, but the line was out the door and I gave up. A good sign for us booklovers? I hope! Today I'll visit "Florida's largest bookstore"- Haslam's-  for the few gifts remaining on my list. If you're not finished shopping, check out these  suggestions. Happy reading everybody!

Although right this minute, I can't think of anyone to give one of my new favorite holiday novels to, if you have a teen reader, or even older, may I suggest DASH AND LILY'S BOOK OF DARES. Told in alternating voices, these two teens send readers on an adventure that's great fun. A mysterious notebook! A girl and a boy! New York  at Christmas! Here's Lily, on spending the holiday alone: "In the future, I decided I would tackle the solitude thing more enthusiastically, so long as solitude meant I could also walk in the park and pet a few dogs..."
Another book, already purchased and presented- Brian Lies' BATS AT THE BEACH. I've already written about this new picture book, but it was road-tested at our house this weekend. (When the grownup reading it continues the story even after the two-year-old lapchild wandered off, you know the book's a winner.)
I've read so many middle-grade novels this year that it's impossible to choose a favorite. But for gift-giving, I know just the kid who'd love The Red Umbrella, which I reviewed for The Christian Science Monitor this summer. Oddly enough, the only vacation my family ever took when my siblings and I were very young was to Havana, Cuba, pre-Castro. Although I was too young to remember many details, my mother's budding skills at the movie camera produced a record of the trip that we still smile about. Cuba made a big impression on me. I couldn't have imagined a more exotic place. Christina Gonzalez's account of the children whose parents sent them away from their homes to live in the United States, via "Operation Pedro Pan," is compelling and highly readable.
So Ho Ho Ho to all. I'm bundled up and off to shop!

Posted by Augusta Scattergood at 10:28 AM 2 comments: 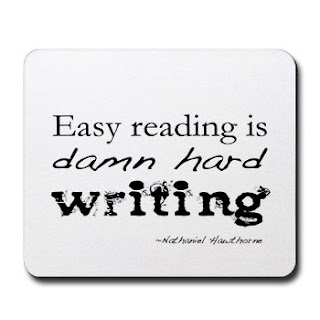 Quote for the Day: from The Round Table

Dorothy Parker, founding member of the famed Algonquin Round Table.

(I still remember having tea at the Algonquin with one of my favorite people, LePoint Smith, who swore we were sitting at the exact table where all these great writers had once shared their libations and creations.)

I truly never thought I'd say this, but I love my mobile device...
And this article in today's New York Times, in the special Personal Tech section, kind of says it all. But I disagree with the writer at the end. I don't equate my IPhone with teenage love. I'm not planning to swap it for a new or completely different model in a year or two. In fact, it's a year old now, and I'm still devoted.

(Plus, I learned a new word. Even if it's one I may never use again, I like the look and the sound of CHAMFER...)
Posted by Augusta Scattergood at 7:49 AM No comments:

Way back when I first had a glimmer that writing for kids might be something I loved, the first publication I subscribed to was the newsletter of the Children's Book Insider, Write4Kids. In fact, I still have many, quite old and well-read, back issues. Now a monthly update arrives in my inbox with some regularity and I read it when I have time, though I no longer subscribe to the actual newsletter.

So I'm a little behind the times with following their new 13-year-old contributing editor. Yesterday's email brought an update, and her article on "Keeping it Real" intrigued me.
(Being a huge, adult fan of Glee-- and I agree about Glee seeming like those kids aren't really in high school- this comment in particular makes me wonder:


I watch Glee. I like Glee. But it doesn’t seem like a show about a high school—perhaps a college. They don’t even really use slang—they just have pithy insults, usually said by the adult characters on the show. Although I like the show a lot, it doesn’t feel like it’s even about teenagers.)
True? Well, she's the teenager here. She sure knows her slang, and her point about getting it right, regionally, makes sense.

So if you have a spare moment today, click on over and share with me what you think about her take on teen slang.

One thought comes immediately to my mind. Be careful of the latest. What's "in" today is gone tomorrow, before your manuscript sees the light of publishing day...
Posted by Augusta Scattergood at 7:59 AM 3 comments: