On Naming a Character Thelonious

October 10th is the birthday of that great jazz pianist, THELONIOUS MONK.

Here's an image of his fabulous portrait, via the Smithsonian's National Portrait Gallery (which may be my new favorite DC museum): 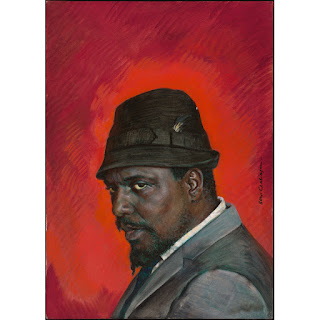 His music and his name inspired a little backstory in my second middle-grade novel, THE WAY TO STAY IN DESTINY.

Theo was named by his musician parents. But they died when he was quite young and the grandparents who raised him lived on a farm and weren't exactly music or jazz aficionados so he never fully understood the significance of his name.

I love creating backstories like his. Even if my readers never know them, they deepen and complicate a character. There may not be a lot of middle-grade readers familiar with Monk's music. Perhaps after reading my book, they'll be curious to listen. But that's not why I chose the name. It's part of my Theo's story. And when I happened upon the reason to give Theo that name, it opened a part of the plot that I hadn't figured out yet.

From Writer's Digest. Great "rules" which of course can be broken.

This one has a thought or two about the ethnicity of names.

And a name generator!
"Aim to have the name suggest something about the character. Think of the book Little Women by Louisa May Alcott, and that family of girls. Beth was the quiet, gentle daughter; Jo the strong, boisterous one; and Amy the baby of the family."

(I'm about to name a character after a great guy I worked with. Doesn't Mr. King sound like somebody you'd trust?)


So Happy Birthday to Thelonious Monk. Here's a little music for you, your students, or to save for later:

Posted by Augusta Scattergood at 7:30 AM 2 comments:

Originally from Cleveland, Mississippi, I now live in Washington, DC.