Whether you're celebrating Halloween today, later (like my town in NJ), or never,  here are two books I've shared with some of the ghouls I know this season.


I adore this little vampire.
I believe even very young children can enjoy VAMPIRINA BALLERINA and not even know she's a vampire, or get some of the subtle, funny, smart references.
They will love the story and the fabulous illustrations.

Kathryn Erskine said it perfectly in her blog interview with the author. CLICK HERE to go there.

Advice that's good for life, not just Halloween, for all ages. For story times, for sharing: 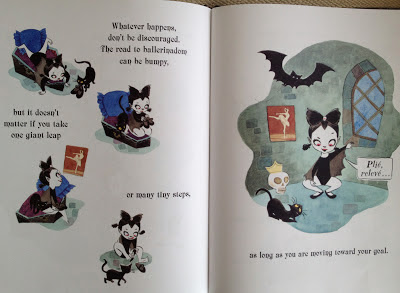 Michael Rex has a new board book version of GOODNIGHT GOON.
Fun for grownups and the SuperHeroes in our lives.
(Michael's mom shared this book with me--Thanks, Kathy! He grew up in our little NJ borough.)


And here's my reading Superhero. Scary, no? 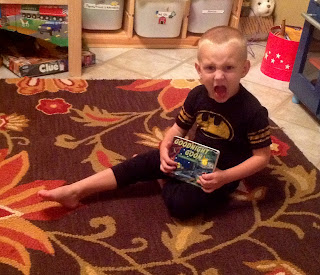 A Poem and a Book
Posted by Augusta Scattergood at 6:21 AM 2 comments:

The Texas Bluebonnet Award Master List was revealed yesterday in Austin. (My friend Lee tells me the big Texas Book Festival is the place to be this weekend.)

Batman and Robin made the announcement!
That would be Batman (Jon Scieszka) and Robin (Adam Rex).

GLORY BE was named to the list of twenty books for grades 3-6.

Thank you, Texas!
Posted by Augusta Scattergood at 1:03 PM 1 comment:

If you read it in Publisher's Weekly, it must be true.

My next book has officially been announced:

Andrea Pinkney at Scholastic has acquired the tentatively titled The Way to Stay in Destiny by Augusta Scattergood, author of Glory Be. In her new story, 12-year-old Theo comes to a small Florida town in 1974 with Uncle Chester, his new guardian whom he doesn't really know, to take up residence in Miss Sister Grandersoles's Rest Easy Rooming House and Dance Academy; there he discovers piano, baseball lore, friendship and a renewed sense of family. Publication is scheduled for 2014. Linda Pratt at Wernick & Pratt Agency did the deal for North American rights.

SO EXCITED!
Posted by Augusta Scattergood at 5:56 PM 13 comments:

Okay, I'd love it if my tiny office looked like this- 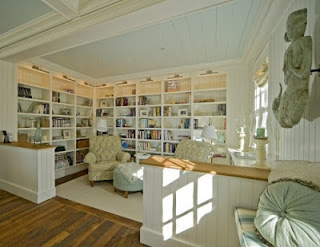 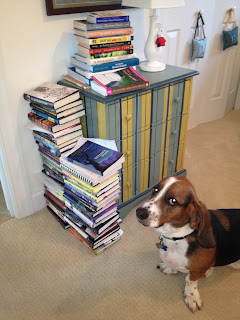 However, it looks better than it did last week.

I had no bookshelves in my working space, but tons of books.
Not good for a former librarian to have books willy-nilly.


Rocky the Rock Star dog did not approve. 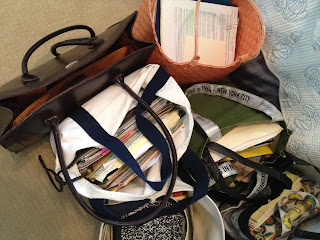 And writers have TONS of notes. At least I do.

I keep all my writing ideas in bags. Easy to transport.

(At least till I have time to transfer them to Scrivener.) 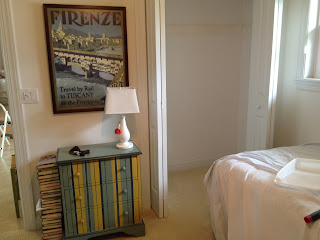 So we cleared out a closet.

(Husband is handy. He painted, spackled, and got it ready. Thanks, Jay!)

And now- Voilà! I can see everything I need to see. 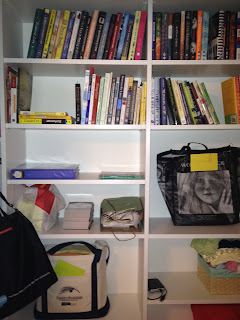 Of course, the books keep coming. I think I will need more shelves. Very soon. 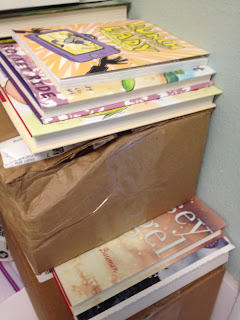 Posted by Augusta Scattergood at 9:16 AM 9 comments: 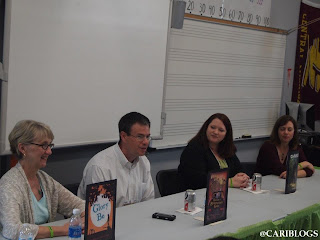 Debut Authors, four of us, were questioned by some really smart Tweens.

I'm sharing a couple of their brightest questions.

(Not counting one from the little girl on the front row of our last presentation who nibbled at a  PayDay bar and asked us our favorite candy.)

Here are just four of the questions, asked and answered by each of us.

1. How did you decide what author name to use?

2. Are you nervous about your next book?

3. Do you write the entire book through, or in bits and pieces?

4. How did you come up with your title?

Fellow authors, who might find yourselves on the answering side of smart kids' --and a few grownups who waited patiently till the kids finished-- questions,  how would you answer these?

Dare to Debut Books! All four of us.

If you missed yesterday's post, with all the pictures from TWEENS READ,
click here, or scroll along to the next blog entry.

Posted by Augusta Scattergood at 3:57 PM No comments:

I offer you a quick photo tour of this amazing event. I mingled, I learned, I ate, I talked.
Highlights? Too many to list?
But meeting and sharing the panel with my fellow Debut Writers was up there.
Lynne Kelly, W.H. Beck, Deron Hicks, and me.

Here are our books:

All the authors gathered at the Bobby Shaw Middle School in Pasadena, TX for a full day of kids and books. What could be better.

Here we are being briefed by the amazing Cathy Berner, bookseller extraordinaire, of Blue Willow Books in Houston.

This was where we ate and hung out between sessions. (Did I mention the fabulous food?) 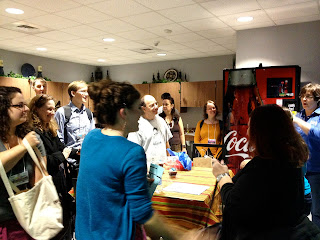 That's Cathy on the right, in blue. Trent Reedy's the tall guy in the back. (Oh, and Cynthia Leitich Smith and her husband Greg- who presented on the Guys Write panel- were also there. Every aspiring author needs to know about Cynthia. Her connectivity is phenomenal. Her advice exhaustive and totally professional.)

But more about the food.

A librarian and her husband made these precious things. 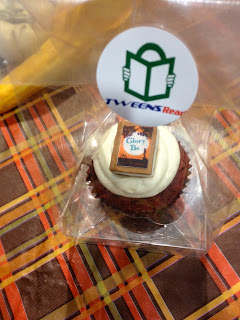 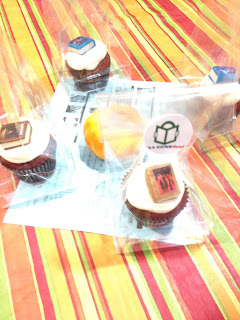 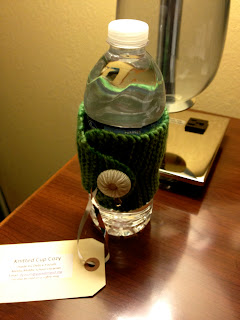 This was in our goody bag. Yes, not really food.
But it reminded me so much of the little holders my grandmother and her friends slipped over their "co-cola" bottles that I had to share.

Hand knit by a volunteer. 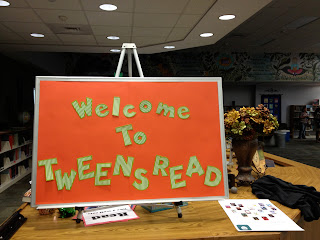 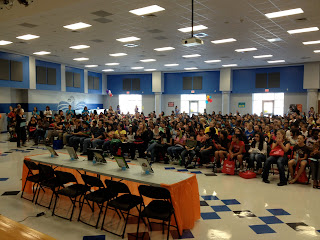 Maybe my favorite quote of the day? Keynote speaker Heather Brewer, on being bullied and finding a safe place in school:
"Libraries are lined with bully kryptonite!"

I really intended to save my cupcake forever. Really, I did.
I'm glad I took the picture. After going through airport security, it was flattened. But it still tasted amazing. I tried to save the book, at least. However, it also was squished. So of course I had to taste it. (Fondant.) 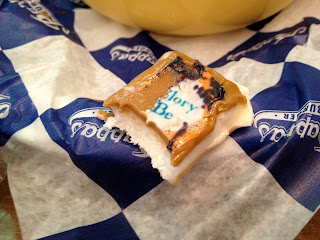 The cake was Red Velvet. The icing creamy and light.
I'm sure they made the cupcakes with Emma and Glory in mind... 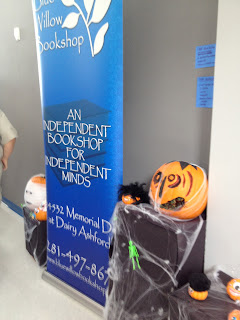 THANK YOU Blue Willow Books and Tweens Read. An amazing group of volunteer librarians and teachers and booksellers.

Word to my fellow authors. If anybody ever invites you to a book event in Texas, say yes.
Don't even bother to ask questions.
Just go.
Posted by Augusta Scattergood at 10:44 AM 7 comments:

For a couple of years, on this day, I've posted the same piece about my dad.
He was a character. He was entertaining, irreverent, brilliant.

I was going to write something new this year.
Something about him teaching his kids so much. How to dance, pray, debate, tie our shoes not in double-knots. He taught me to drive his jeep over the levee, clean a fish, back up a boat trailer.

But instead of writing a thoughtful blogpost, today I'm thinking about my trip this weekend to Houston. To talk to kids and their teachers on a panel of writers about our debut books, at the Tween Reads Festival.

I think Daddy would understand.
And I think he'll really smile down when I write that book about fishing.

If you care to read my previous thoughts about Dr. Jack, CLICK right here, please.
Posted by Augusta Scattergood at 8:49 AM 4 comments:

Writing book reviews is easy, right? Read a little bit, google the author, jot down your thoughts and Bingo! A review.

It's harder than it might look. At least for me.
The reading, the pondering, the writing. I agonize way too much over tiny word choices. Edit a zillion times for a 400-word review. ACK! But I love doing them.

And I mostly review books I love a lot. Almost all "Middle Grade" for the Christian Science Monitor and adult for Delta Magazine. Anything goes on the blog.

That said, I couldn't resist this book marketed as Young Adult.

It's not a long book. It's an intriguing one. Its premise, page-turning and fascinating.

EVERY DAY by David Levithan.
Posted by Augusta Scattergood at 5:26 PM 2 comments:

About halfway through a little book I like (Click here for more on this book: THE POCKET MUSE), I found the story about the bottle of wine.

How they'd saved a really great bottle of wine for something worth celebrating. And it ends with the advice, pretty much Don't Save the Wine-

Celebrate a rejection that includes a personal note.
Celebrate finishing something hard.

And when publication finally comes, celebrate everything.
The initial acceptance.
The galleys coming in.
The editor calling to tell you the publication date.
The day you get the final copies.

For me, this has been a year of celebration.

I love what fellow debut author Caroline Starr Rose says she's learned in her first year of publication. (She even created a poster on the topic, free for the asking! CLICK HERE TO GO THERE.)

I'm pondering GLORY BE's first year, in anticipation of traveling to Houston's TWEEN READS Festival where I'll be on a panel along with these other debutantes...

Any other debut authors out there with sage advice? Are you celebrating even the small successes? Thoughts on your own first book's publication? Or anticipation of it?

Posted by Augusta Scattergood at 10:36 AM 6 comments:

Advice from The Best

I've been thinking a lot about this past year, my book's debut.
So of course, I love this Cynsations interview, filled with advice
from Rita Williams-Garcia via Cynthia Leitich Smith.
Here's a bit of it:

What advice do you have for the debut authors of 2012?

My advice is hypocritical, but it is still good. Put at least one third of your energy into creating your online presence when your book comes out.

I know, I know. I shrink from blogging, I tweet modestly, and you won't catch me on radio. But do these things, anyway.

While you’re doing that, you should be deep in the throes of writing your next book. Write 40,000 good words every year. Always have a story going.

CLICK HERE to read every single word of that interview!

CLICK HERE to read my review of her terrific book One Crazy Summer.

Here's another review of and a few of my thoughts, as shared on Joyce Moyer Hostetter's history blog.

When I speak to kids, at the end of my talk, I love to tell them:

Now go right home and ask your grandparents, your neighbors, anybody who lived through these interesting, challenging times, to tell you all about it.

I stole that idea from Williams-Garcia's Horn Book interview:

"I’m hoping younger readers will uncover more personal stories through the “live historians” in their homes and neighborhoods." Rita Williams-Garcia

Welcome, Shannon, and another October giveaway!

Okay, I admit it. I'm a pushover for books written about the South, with true Southern characters, told in an authentic Southern voice.

On the other hand, my Fake-South-BS-meter is pretty strong. I'm always skeptical when somebody says "You have to read this one. It's funny and honest and a great book narrated by an honest-to-goodness Southern kid. With a really great voice."


Well, yes, it is right in the case of Shannon Wiersbitzky's middle-grade novel, THE SUMMER OF HAMMERS AND ANGELS. Shannon sent me a copy when the book was published and now she's offered to answer a few questions and she's giving away a signed copy to a commenter, a re-tweeter, a Facebook sharer. Just let me know if you're interested, either here or on Facebook, and you'll be entered in the drawing.