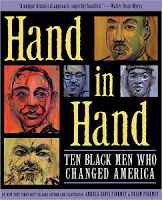 A must read.
Both the book and the speech.

http://www.hbook.com/2013/07/choosing-books/horn-book-magazine/coretta-scott-king-author-award-acceptance/
Posted by Augusta Scattergood at 9:30 AM No comments: 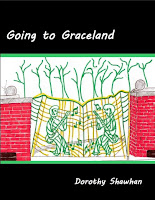 I'm reviewing a book for DELTA MAGAZINE right now. (More later on that.)

It's only available on Kindle, and the magazine mostly reviews traditional books. But because it's written by a local (local to the Delta), we are spotlighting it.

This is the bargain of the year.
Dorothy Shawhan's GOING TO GRACELAND.
Click on that title link up there, please.

Only $8.00 for your Kindle.
(Free to borrow if you have a Prime Account. Though I hate to share that because I'd love to think the author got a tiny bit of amazon's $$$ if we read this book...)

When I read the New York Times obituary of Delta bluesman, T. Model Ford, this week, it reminded me of the stories Dorothy Shawhan's travelers tell in her book. She's a Delta State University literature literature professor, mostly retired, who now teaches creative writing.
So the writing is flawless.
And then there are the stories her characters share.

Which brings me to T. Model Ford's obituary.
Which you must read. Just for the stories.

http://www.nytimes.com/2013/07/19/arts/music/t-model-ford-late-blooming-bluesman-is-dead.html?emc=eta1
Posted by Augusta Scattergood at 1:09 PM No comments:

Reading the Story/ AKA Readers Theater

Teachers- do you do Readers Theater in your classrooms? Are you gearing up for next year?
How about you camp counselors out there? Drama camp?

If so, here's a terrific resource from one of my favorite blogs.


Reader’s Theater puts the kid INTO the story, inhabiting his favorite hero, villain or sidekick. Words on a page literally come to life when real kids stand up to act out a scene.

That's from Tami Lewis Brown over at FROM THE MIXED UP FILES, a blog every writer/ reader/teacher of Middle Grade novels should bookmark right now.

Here's the link to Brown's post about Readers Theater:

And I posted a page with the Readers Theater script from GLORY BE.
Here it is, ready for your reading/ acting/ dramatic pleasure.

CLICK THIS  for a short description of the Readers Theater a funny, hammy, dramatic group of writers did together at the Texas Library Association. 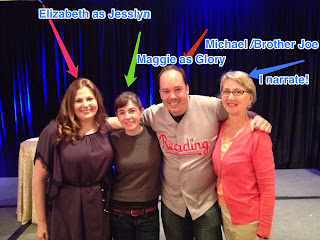 Posted by Augusta Scattergood at 5:40 PM No comments:

What a great idea! A book discussion, on the radio, for kids who are trapped in the backseat with nothing but- Alas and Hallelujah! - a REAL BOOK.

When my buddies at Scholastic got the word, they were as excited as I was.
Such an honor. Such a thrill. Such an unexpected surprise!

That's my fabulous publicist from Scholastic, Emma Brockway, on the right.
With Brooke her summer intern- from Georgia!-who went with me to the taping.
Thanks, guys! 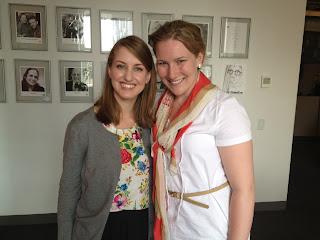 We traveled to the NPR studios in NYC.
(Little known fact: A Tomato Plant Grows in the Window) 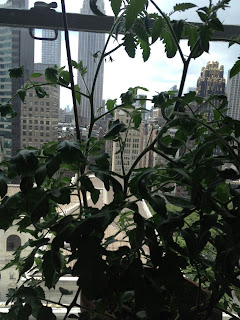 And a bunch of my kid readers in Como, Mississippi, got to be the Little Interrogators, as my friend Carl named them (Yes, he's an attorney. Surprise!).

Well, those interrogators were fabulous. The Como Public Library is truly remarkable.
When the show aired last week, their amazing librarian, Alice Pierotti, scheduled a listening party.
About 50 people listened in from the library. Wow. 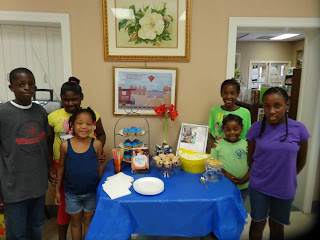 Here are a few of the questions they asked:
- Did you write the book to tell what your life was life?  Were you around in 1964? - Jy'kerria Barnett
- Why did you decide not to illustrate the book? - Sylvester Bowden Jr.
- Where did you start writing stories? Kelmisha Jackson
- How was Glory so brave even if the grown ups around her were not? Cofield Collins
- When you wrote the book, did you keep having to write it over and over? - Owen Collins 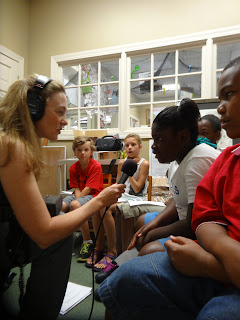 One of my very favorite pictures! 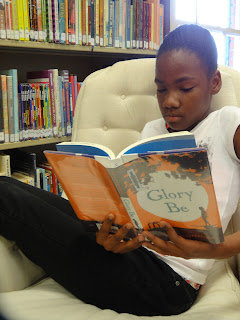 Of course, it being radio and the run time being SEVEN minutes instead of the HOUR they taped me, not all of those questions made it to the air.

But they were terrific questions, as were the others sent in by young listeners.

Here's the link to listen to the show.

(I think the very well-spoken young lady reading Glory's part has a serious future in radio.)

For even more pictures, check out the Facebook page of the fabulous Como Library:
https://www.facebook.com/comolibrary

Words of Wisdom From Books of Wonder 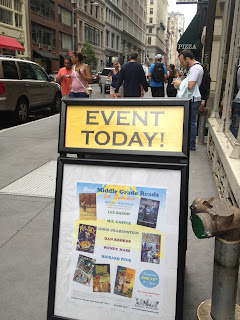 
True confessions. I was there to hear two in particular. 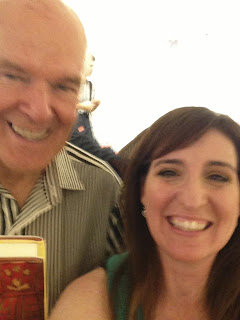 Wendy Mass and Richard Peck.
(I stole Wendy's Facebook post for the picture. She won't mind, I'm sure.)


Both have new books hot off the press.
I'm reviewing Peck's THE MOUSE WITH THE QUESTION MARK TAIL right now. I absolutely love it. Ages 10 and up, according to Dial Books (thank you for the ARC, publicists!). But really, I think good readers as young as 8 will totally get it.

Wendy's newest, PI IN THE SKY, is waiting. I've known Wendy since she popped into the Chatham Library where I worked a few years ago. She's smart, funny and full of great ideas.
One of my very favorite books by Wendy is Jeremy Fink and the Meaning of Life. Oh, wait, I also adore Every Soul a Star.

I could go on and on.

Both Wendy and Richard answered the terrific questions with such humor. But I didn't dig out my notebook to scribble down quotes until the end so I won't quote the other authors, though much of their wisdom was worth remembering.

Richard Peck was the last to speak...

"Focus on your first scene. Because if the reader doesn't like that, he won't read the rest."

"When you get your first line, the whole thing unfolds for you."
(on the perfect First Line, which his new book totally has!)

"Your characters must sound like real people. Not like the author."
(on why he reads everything aloud)

All of the above are pretty much verbatim from Mr. Peck.
Glad I found that notebook.

Authors in the audience     ☞ 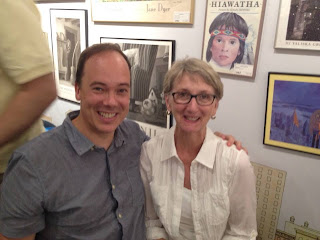 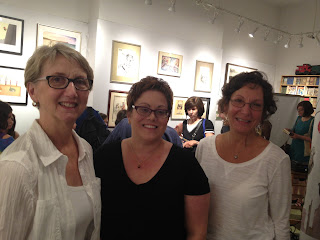 You just never know who you'll run into at BOOKS OF WONDER, do you?

Posted by Augusta Scattergood at 10:48 AM 4 comments:

Well, I've done it.
I've just knowingly typed an "ly" adverb after a dialog tag. It couldn't be helped.