Circus Trains (and others) 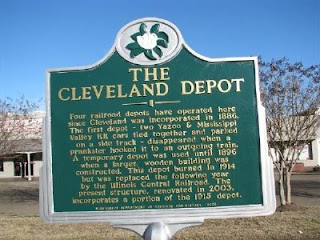 Today's New York Times published an interesting article about the circus train, byline Secaucus NJ. Circuses and trains have always fascinated me. OK, no comments needed about cruelty to animals and the like. Circuses and kids just go together.

As a child, the "train they call the City of New Orleans" ran right through the middle of my hometown. But no trains run through Cleveland, MS, these days and the tracks have been planted with roses and turned into a walking trail. Quite beautiful but I'm glad they turned the depot into a Train Museum.

There's a marker on the site now, and the text is a story I never knew:

Four railroad depots have operated here since Cleveland was incorporated in 1886. The first depot - two Yazoo & Mississippi Valley RR cars tied together and parked on a side track - disappeared when a prankster hooked it to an outgoing train. A temporary depot was used until 1896 when a larger, wooden building was constructed. This depot burned in 1914 but was replaced the following year by the Illinois Central Railroad. The present structure, renovated in 2003 incorporates a portion of the 1915 depot.

Our dad, Dr. Jack Russel, was the "train doctor" for our little town. All that meant to us kids was that we could ride the train for free. And all he told us was that if someone on the train got sick, near Cleveland, the train folks would call him. Since everybody in town called him, night and day, this made sense. He never told us he might also get called in for a train wreck and the thought that a train would crash just never occurred to me, as a child.

THE FLOATING CIRCUS is a great kids' book about a circus boat. A circus, a riverboat. Excitement, sickness, the orphan train. Quite a good read. I wonder if there's a book that's as much fun to read, written for kids, about the circus train. Suggestions? Research needed!
Posted by Augusta Scattergood at 12:46 PM

AG-That train, although it no longer stops in Cleveland or Batesville, it is still called "The City of New Orleans". Oddly enough, Will and I will board that train next weekend heading to New Orleans JazzFest!

Have fun! Where do you have to go to get the train? Memphis? But it still races through the Mississippi Delta, I bet! I do love trains.

We're actually catching it in Greenwood just across from The Crystal Grille. At least we won't have to fight about who drives home after the long weekend. Hoping to get into Galatoire's! Cross your fingers.