My stay in New Jersey this summer and fall has been marked by field trips. Not the kind I used to make with third grade classes to Waterloo Village and the aquarium at Coney Island, or with the fourth graders to Ellis Island. And not even the story-gathering kind, those trips down Memory Lane with my sister and brother and my Mississippi friends.

Nope, this year I've been venturing out to places I've never been before. Thanks to Al and Barbara for taking me to Bayonne New Jersey's own 9-11 Memorial. 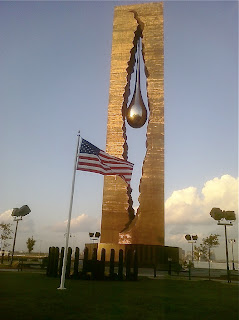 Like any good field tripper, I did my research in advance, which led me to the New Yorker article on the link above.
Love this line:
(After a Jersey City arts organization rejected it) ...it turned out that Bayonne, a city where artists do not exert undue influence, was in the market for a 9/11 memorial.

The Memorial is not without controversy. In fact, that's how I first heard about it. An email claimed it was the memorial that some folks wanted to sweep under the rug, that nobody knows about it, that it was a gift of the people of Russia. Which turns out to be partially true. It is a gift from Russia. But nobody's trying to sweep it anywhere. There are numerous 9-11 Memorials in many little boroughs and small cities all over New Jersey. And a lot of them are not that well known, even though they are very impressive.

Bayonne's memorial is breathtaking actually. To get to the site, we were happy to have a GPS. But once there, we were in awe, first of all, of the setting. The view of the NYC skyline is exactly where the Twin Towers once stood, directly across the river. 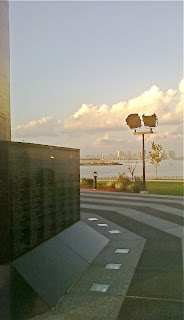 The sun reflects off the monument and turns it golden in the late afternoon. The monument depicts a teardrop and is impressive in its size. You can't help but feel moved standing there, looking up and looking across.

Bayonne has a lot to be proud of.

And that line about Bayonne from the New Yorker? Fuhgeddaboudit. Bayonne may not be Jersey City or Hoboken, or even any kind of arts center, but they've got at least one terrific Italian restaurant. Pasta to die for. Cheesecake that made me want to order a whole one to bring home. Chicken so tender and so well prepared that I will forever hold it as a gauge to measure all other chicken dishes by. All this and 50% off the menu during the week. We almost fainted when the check arrived.

Now that's the kind of field trip I hope to repeat before departing the Garden State this winter. 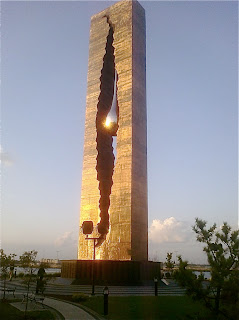 That's a unique memorial and the view, even in the photo, is really impressive.

Although I haven't ever visited Bayonne(yet), it is where my grandparents (on Mom's side)grew up. Jessica wears her great-grandfather's Bayonne HS pin on a gold chain.

Sounds as if you're having a good time and I like hearing about your field trips. Thanks for sharing.

What a stunning memorial. I know that area -- not far from where Leslie and I volunteered for the Salvation Army, making soup, etc, for the counselors helping families through the paperwork. Very touching -- the experience and the memorial.

Teddie- You're going to have to come visit us and see the Memorial. You, too, Lee!
It's quite something.